The exact value of $\sin{60^\circ}$ is in fraction and $0.866$ in decimal form. The value of sine of angle $60$ degrees can be evaluated in two geometrical methods.

It is a geometrical method, which is used to derive the value of sin $60$ degrees in fraction form and it is actually done on the basis of a special geometrical relation between opposite side and hypotenuse when the angle of the triangle is $60^\circ$ or $\dfrac{\pi}{3}$.

The geometrical property between them discloses that the length of opposite side is exactly equal to the $\dfrac{\sqrt{3}}{2}$ times to the length of the hypotenuse. 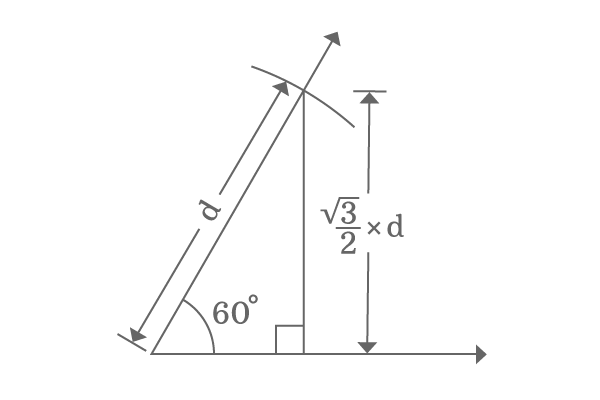 Thus, the value of sine $60$ degrees is calculated exactly as $\dfrac{\sqrt{3}}{2}$ in fraction from theoretically in geometrical method.

The value of $\sin{60^\circ}$ can be calculated in geometrical method practically by constructing a right angled triangle with an angle $60$ degrees. 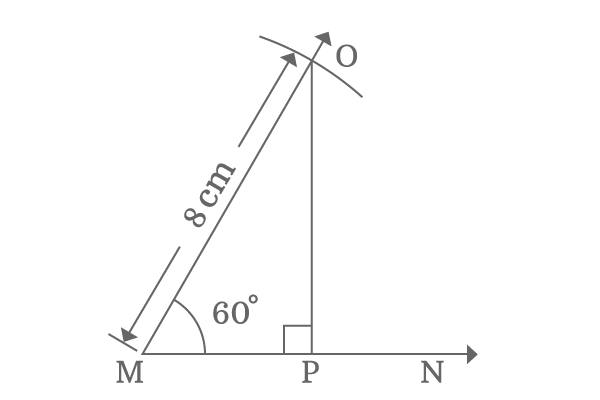 Firstly, draw a horizontal ray $\overrightarrow{MN}$ by the ruler and then draw a $60$ degrees line in anticlockwise direction from point $M$ by the protractor.

Finally, draw a perpendicular line to horizontal ray from point $O$ to complete the construction of a right angled triangle ($\Delta PMO$).

The angle of the right angled triangle $PMO$ is $60^\circ$. So, evaluate the sin $60$ degrees by calculating the ratio of length of opposite side ($OP$) to length of hypotenuse ($OM$).

The value of $\sin{60^\circ}$ is $0.86875$ practically but it changes every time because it depends on the measurement of length of opposite side but the values which are determined in practical geometrical method are very closer to $0.866$ all the time.