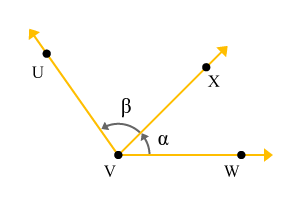 Two angles formed by the three lines which have a common arm and a common vertex, are defined adjacent angles.

Consider three lines and join one of the endpoints of them at a point, which is called a vertex. Let us call it point . one of points on the lines are located at , and on a plane. Thus, three rays , and are formed geometrically on a plane.

Assume, the angle between the rays and is . In other words

Assume, the angle between the rays and is . In other words

Observe the figure and the ray is a common arm which helps the other rays to make two angles but all three rays are started from a common vertex (). Therefore, the two angles and are called adjacent angles.