Find the Area of a square

Take a square and assume the length of each side of this square is represented by $a$.

We have to calculate the area of this geometric shape mathematically. According to the mathematics, the area of a square is equal to the square of the length of the side.

In this case, it is taken that the length of the each side is equal to $a$. Therefore, the area of this square is equal to $a^2$, which is very important to remember for deriving the $a-b$ whole square algebraic identity.

Basic steps to split the square

For proving the $a$ minus $b$ whole squared formula geometrically, we have to split the square as four different geometrical figures.

Geometrically, we have successfully divided a square as two small squares and two rectangles.

Evaluate the Areas of Geometric shapes

Now, calculate the area of each geometrical shape mathematically. 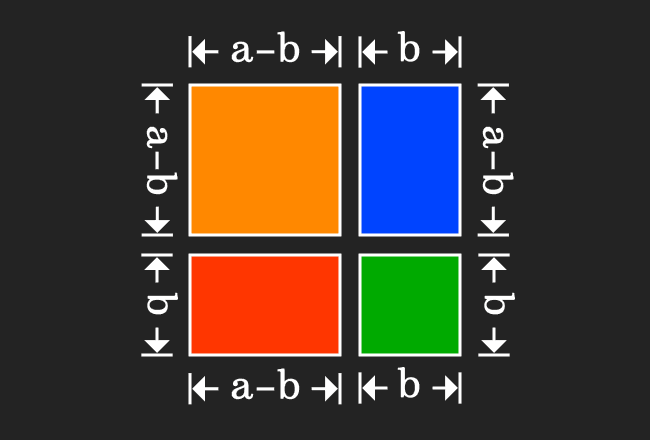 Thus, the areas of all geometrical shapes are calculated and expressed in algebraic form.

Equality of the Areas of the Geometric shapes

It is time to prove the expansion of the $a$ minus $b$ whole squared formula geometrically.

In this derivation, we have to find the expansion of $(a-b)^2$ identity. So, shift all the terms to other side of the equation for finding the equivalent value of the $a-b$ whole squared.

In the right hand side of the equation, the second and third terms $b(a-b)$ and $(a-b)b$ are equal mathematically as per commutative property of multiplication.

It is read as the $a$ minus $b$ whole squared is equal to $a$ squared plus $b$ squared minus $2$ times product of $a$ and $b$. Thus, the $a-b$ whole square algebraic identity is proved in algebraic form geometrically.