Geometric proof of Area of an Annulus

The formula for finding the area of an annulus (or a circular ring) is written as follows.

It can be derived in mathematical form geometrically. Let’s learn how to find the area of a circular ring (or an annulus) by the geometrical approach.

Areas of the circles 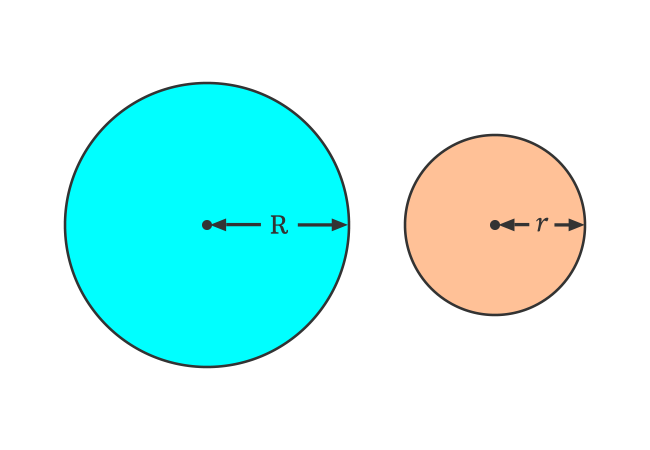 Firstly, consider two circles and their radii are different. The radius of one circle is denoted by $R$ and the radius of the second circle is represented by $r$. Here, $R \,>\, r$

Similarly, the areas of both circles are denoted $A_1$ and $A_2$ respectively. According to the area of a circle formula, the area of each circle can be written as follows.

Area of the concentric circles

The two circles are arranged in such a way that the centers of them coincide at a point. The concentric circles have a common centre and their subtraction forms a geometric shape, called an annulus or a circular ring. Let’s denote its area by $A$.

Now, substitute areas of both circles in mathematical form in the above equation.

Pi is a common factor in both terms on the right hand side of the equation. It can be taken out common from them for simplifying the expression further.

It is a formula to find the area of an annulus or a circular ring from the radii of the two concentric circles.