Equation of a Circle when the circle passes through the origin 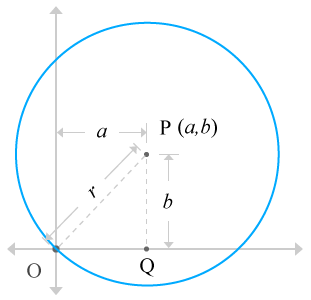 Assume, is an origin of the Cartesian coordinate system.

Assume, a circle having units radius, passes through the origin of the Cartesian coordinate geometric system.

The distance from point to centre of the circle is .

According to the Pythagorean Theorem,

Later, this mathematical relation will be used in developing the equation of the circle.

It will be used later in developing the equation of the circle. So, look away from this mathematical relation temporarily. 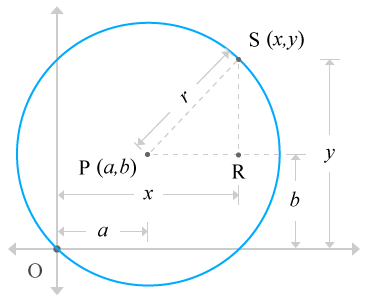 Join the point and and the distance between point and is equal to radius of the circle. Therefore, .

As per the right angled triangle, and . Substitute these values in the Pythagorean Theorem to get the required equation.

It is already proved above that . Substitute it in the above expression to start simplifying the expression.

It can be written as follows

It is an algebraic equation which represents a circle when the circle passes through the origin of the Cartesian coordinate system.

How to develop Equation of a Circle in Standard form