Consider a circle, whose radius is assumed as units. Also assumed, the centre of the circle lies on the -axis and the circle passes through the origin of the Cartesian coordinate system. 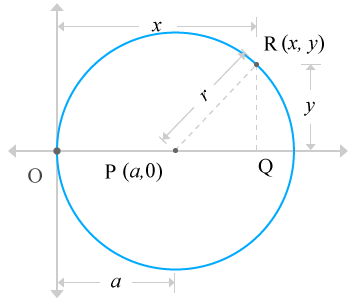 Assume, the centre of the circle is denoted by a letter and the point is located at units distance from the origin in horizontal -axis direction but the point is lied on the -axis. So, the vertical distance of this point is zero units. Therefore, the coordinates of the point is .

Draw a line towards horizontal axis from the point perpendicularly and draw a line from point on the horizontal axis until both lines get intersected at a point, called . This procedure constructed a right angled triangle, known .

The triangle is a right angled triangle. So, applying Pythagorean Theorem to triangle gives us relation between three sides of the triangle.

Substitute these three values in the mathematical relation, developed from the Pythagorean Theorem.

It’s an algebraic equation, which represents a circle when the circle is passing through the origin and also its centre lies on the -axis.

How to develop Equation of a Circle in Standard form